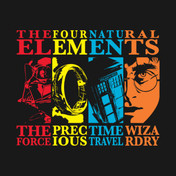 If you're a member of the Oregon Trail Generation like me, you were in your late teens or early 20s when it became cool to be a nerd.  (Unsurprisingly, I have a theory about how that happened.)  At that time, I was nerdy for but a few things: Star Wars, DC Comics (had just started reading Marvel), and three generations of Nintendo games.

Over the ensuing years, I have been introduced to my remaining fandoms by many methods; notably, Cool Kids (specifically, gorgeous girls I wanted to impress) recommended Harry Potter to me.  I have found these many passions to be ornate bridges of conversation with the most surprising of people; one day after a class I taught, a student dragged her high-powered diplomat mother over because she just had to see that I was wearing Gandalf's ring.  The mother and I had a brief but exciting discussion of the Three Rings and the extent to which their significance was downplayed in Jackson's trilogy.

To date, I have met (in person, anyway, thank you Internet) very few who are as passionate as I about any one of my cherished fandoms, and none who love them all.  This leaves me with a huge surplus of fanboy ideas in my head and no single community with which to share them.  So I built myself a community of one here.  You can come and play, or I can hang here and entertain myself with my own thoughts (I'm a bit of an introvert that way).  Either way, this space helps me empty out my brain.

Note: Alien's a little outside my wheelhouse and I've seen exactly one episode of X-Files, but image designer Captain RibMan is all about 'em.  Four elements design by warbucks 360. They've got some great stuff for the polynerd who demands only the finest in cross-fandom representation.